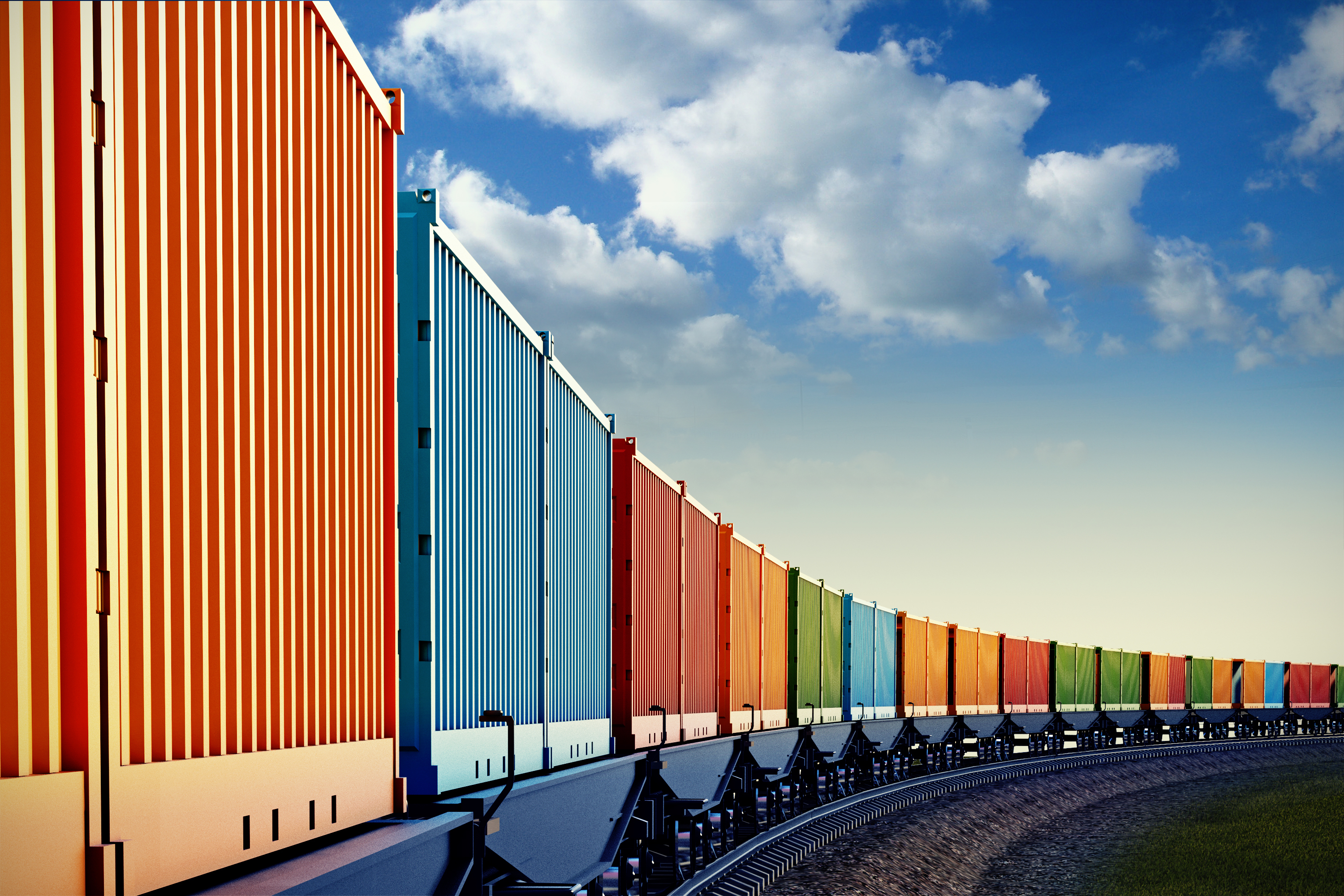 One of the questions that arises is around the performance of Sysbox and whether this extra isolation adds overhead and how it compares to virtual machines (VMs).

This blog post sheds light on this by comparing the performance of workloads in 4 scenarios:

1) A container on bare metal.

2) A system container on bare metal.

3) A container inside a system container.

4) A container inside a virtual machine (VM).

The figure below illustrates each of these: 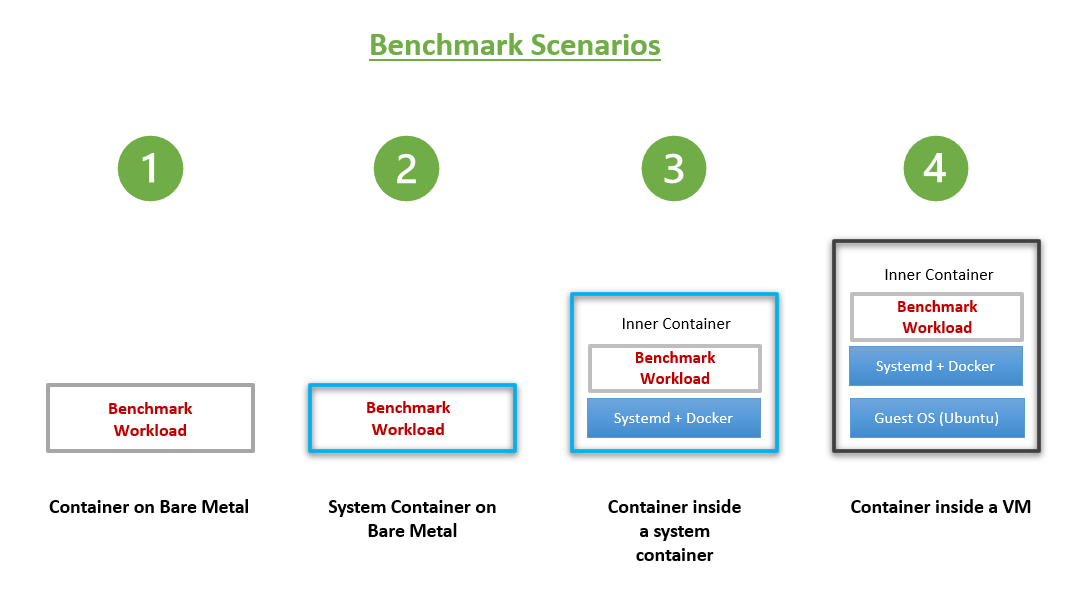 The comparison between (1) and (2) yields the overhead of a system container vs a regular Docker container.

The comparison between (1) and (3) yields the overhead of running a container inside a system container (i.e., nested).

The comparison between (1) and (4) yields the overhead of running a container inside a VM.

And the comparison between (3) and (4) yields the overhead of system containers vs. VMs.

As you’ll see, system containers deployed with Sysbox have minimal overhead compared to regular Docker containers, but are much more efficient than VMs.

This means that using Sysbox to enhance a container’s isolation comes with no performance penalty, while using Sysbox to deploy containers that replace VMs yields much better use of the underlying hardware and can reduce infrastructure costs significantly.

Before describing the results, let’s describe the setup we used to obtain them.

The performance test was conducted on a physical server with the following characteristics:

To obtain the results, we launched several test runs. In each test run, we launched a number of “instances” in parallel, where the instances are all of the same type and correspond to one of the 4 scenarios shown in the prior section.

For example, in one test run we launched several instances of regular containers on bare metal each of which runs a benchmark. In an another test run we repeated this but using system containers. And so on.

To ensure an apples-to-apples comparison, the VM instances are Ubuntu Linux 20.04 (Focal) and the system container instances are also based on a Ubuntu Focal Docker image.

The workloads running inside each instance are from the Phoronix Test Suite, a well known performance test suite for Linux. 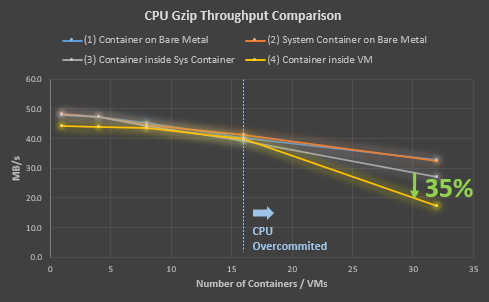 As shown the performance of running a container on bare metal, inside a system container, or inside a VM is very similar, except when the machine’s CPU is overcommitted (i.e., when the instances are assigned more CPUs than are actually available in the system). At that point, the performance degrades quickly, in particular for VMs (likely due to the overhead of context switching VMs across CPUs).

The next figure shows the performance of a disk IO bound workload (i.e., a workload that performs many reads and writes of files). 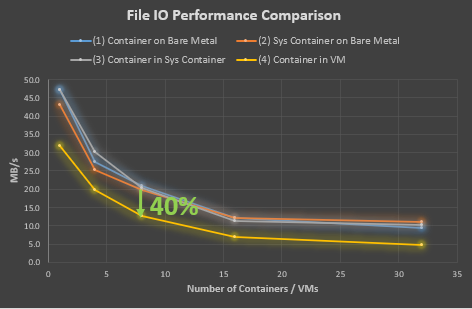 The next figure shows the performance of a network IO workload (using the well known “iperf” benchmark). These results were obtained by configuring a number of instances as iperf servers and directing traffic to them from a similar number of iperf clients. 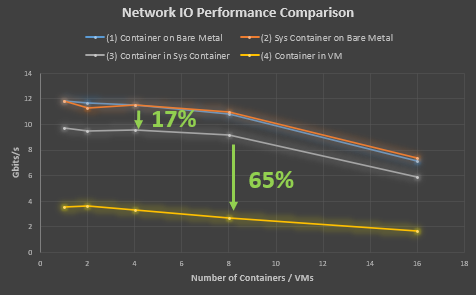 But notice that if we run that same container in a VM, the performance hit is an additional 65%. This is due to the fact that the packets of the container inside the VM must go through the Docker bridge inside the VM, the guest OS, the virtualized NIC, and the host OS network stack.

The figure below shows a comparison of the host machine’s memory utilization: 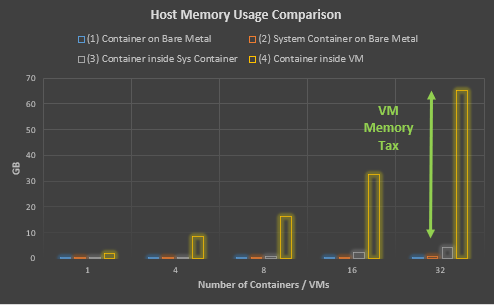 As you can see, memory utilization for running containers on bare-metal or inside a system container is quite low.

However, for VMs it’s much higher. The reason is that when processes inside the VM allocate and free memory, this memory is allocated at the host level but never freed. This is because the hypervisor knows when the guest OS is allocating pages, but does not know when the guest OS has freed them. As a result, you end up with a situation where memory is allocated at host level even though it’s not necessarily in use by the VM’s guest OS.

Some hypervisors are capable of automatically reclaiming unused guest OS memory via “memory ballooning” inside the VM’s guest OS. But this technique is imperfect and can be computationally expensive. As a result, it’s generally recommended that host machines running VMs have enough physical RAM to satisfy the combined total of all memory assigned to the VMs. For example, if you have a host machine where you plan to run 16 VMs each with 8GB of RAM, you generally need 128GB of RAM.

This inefficiency does not exist when running workloads in regular containers or system containers. As processes inside the containers allocate and later free memory, the memory is immediately available for other processes in the host. This means you use memory more efficiently and thus can achieve same performance with less memory on the host machine. For example, as the diagram shows, running 16 system container instances with this particular workload consumes only 2GB of RAM, while using VMs consumes 32GB of RAM (a 16x increase). Depending on the workload this savings factor changes, but it’s clear that containers are much more efficient in this regard.

The figure below shows a comparison of the host machine’s storage utilization. 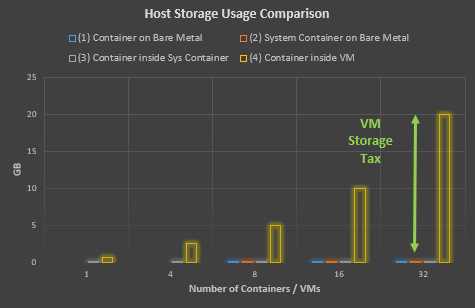 As you can see, the storage overhead for containers is very low, but it’s significantly higher for VMs.

This is because the copy-on-write (COW) technique used by Docker containers is much more efficient than the COW used by VMs on the virtual disk. In this test, each VM instance is adding ~650MB of storage overhead, even though they are all based on the same “master” image. In contrast, containers add only a few MBs for each instance.

One caveat: this experiment used the Sysbox Enterprise Edition (Sysbox EE) to deploy the system containers. Sysbox EE has an optimization that makes it much more efficient than the Sysbox Community Edition (Sysbox CE) when running Docker containers inside a system container. If we had used Sysbox CE, the storage overhead for scenario (3) (the gray bar) would have risen to around 40% that of the VMs. This is not shown in the diagram.

The next figure compares the time it takes to provision VMs versus system system containers. That is, how long it takes for each instance to be up and running and ready to do work. 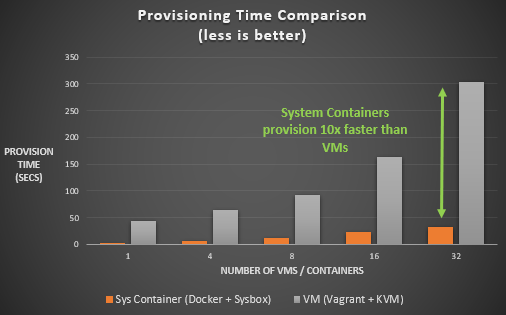 As you can see, the system containers provision 10x faster than VMs. This is because VMs carry the overhead of instantiating the VM and booting the guest OS, while emulating hardware in software. In contrast, with system containers the setup is much simpler: create the container’s abstraction (namespaces, chroot, cgroups) and start the container init process.

This means system containers give developers a much more agile way to create virtual host environments compared to VMs, not to mention the superior portability since they are lighter weight and are not tied to a specific hypervisor, but rather to Linux.

And in both cases, using system containers incurs only a fraction of the memory and storage overhead as compared to VMs (as shown in the prior sections).

This means that replacing VMs with system containers as a way of deploying isolated OS environments can result in up to 50% cost reduction in your hardware. For example if you needed 10 servers to run the VMs, you only need 5 or 6 servers when using system containers and moreover, each server requires less memory and less storage.

The results shown above were obtained by using an off-the-shelf Ubuntu VM with the KVM + QEMU hypervisor. As shown, system containers have significant performance and efficiency advantages over these VMs.

Now, it’s possible to reduce the overhead of VMs through careful tuning of the VM and the hypervisor, and choosing a guest OS that is specifically designed for minimal overhead. This would bridge the gap in performance and efficiency.

Having said this, most users deploy VMs using a common Linux distro (e.g., Ubuntu) and on a regular hypervisor (e.g., KVM + QEMU) just like we did above. Thus, most users will experience the same results we reported and can thus benefit from replacing those VMs with system containers when appropriate.

Fundamentally the performance and efficiency differences between containers and VMs are caused by two main factors: the fact that VMs emulate hardware in software, and the fact that they carry a full copy of the guest OS. These two factors generally make VMs less efficient and less performant, which in turn reduces agility and increases costs.

The above analysis sheds light on the performance of system containers and VMs.

As shown, system containers impose a slight overhead compared to running containers on bare-metal, but have significant performance, efficiency, density, and provisioning advantages over VMs. This translates to reduced hardware costs of up to 50% and increased developer agility.

If you are thinking of using Sysbox system containers to replace regular containers for improved isolation, or for testing, CI/CD, etc., this analysis should give you confidence that the overhead of these containers is minimal with respect to running regular Docker containers.

And if you are thinking of using Sysbox to replace VMs in your data-center, this analysis shows you that the performance improvements and cost savings will likely be substantial, though the savings very much depend on the workloads.