Easy Jenkins with a System Container

Jenkins is one of the best tools for Continuous Integration (CI) due to it’s maturity, huge number of plugins, support for distributed builds, etc.

One of the key features of Jenkins is its support for Docker containers (via the Docker plugin), as it makes it easy to create CI pipelines that rely on specific tools without having to install the tools in the host itself.

In fact Jenkins itself is distributed as a Docker container, which is nice because you avoid having to install Jenkins and its dependencies directly on the host machine.

Turns out however that there are several problems that arise when running Jenkins in a container and using the Jenkins Docker plugin in your pipelines.

This article describes these problems and shows how they can be addressed in a simple way by using a Nestybox system container.

If you are planning to use Jenkins for your CI, this article will help you setup things in a few minutes.

Problems with Jenkins inside a Container

When installing Jenkins on a host, the easiest way to do it is to run a Docker container that contains the Jenkins server in it. This saves you the trouble of having to install Jenkins and all it’s dependencies on the host machine directly.

Jenkins provides a Docker image called jenkins/jenkins that has the Jenkins server in it.

However, if your Jenkins pipeline uses Docker as an agent (which is common and convenient), the jenkins/jenkins image won’t work.

For example, if your pipeline has something like this:

then Jenkins will request Docker to run the golang image. But since Docker is not present in the jenkins/jenkins container, the pipeline will fail.

To solve this, you must first create a custom Docker image that has Jenkins and the Docker CLI in it. Here is sample Dockerfile for such an image:

You can build it with:

But even this is not sufficient. Turns out that the jenkins/jenkins image (which the Dockerfile above uses as its base image) defaults to a non-root user inside the container. This user will not have permissions to access the Docker daemon’s socket mounted into the container. Thus, when you run your pipeline with Jenkins, you’ll get this error:

The solution is to run the image above with the following command:

With this command, the Jenkins master will run inside the container and will be able to invoke the Docker daemon on the host to create the agent containers (such as the golang container for the pipeline example above).

The following figure shows the configuration. 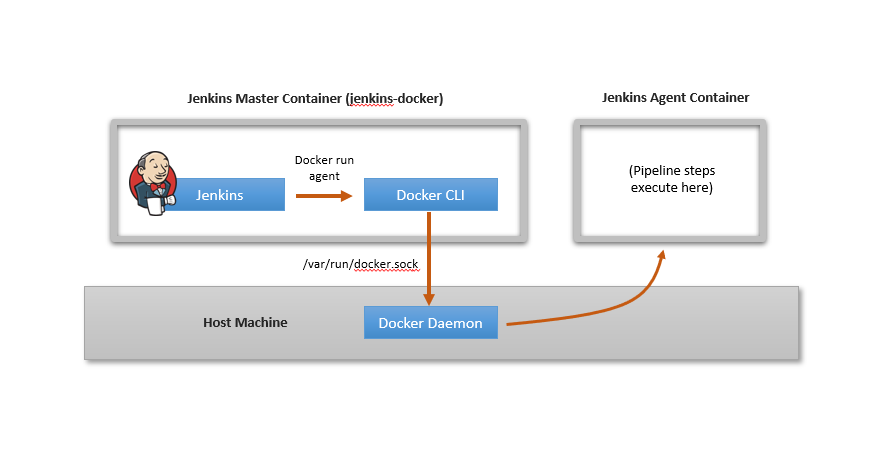 While this configuration works, notice that all containers spawned by Jenkins are created at the host level. This is fine in many cases, but causes problems when your pipeline has Docker commands in it as described in the next section.

Sometimes it’s useful for a pipeline stage to invoke Docker commands. For example, the pipeline definition below configures a Docker agent with the docker image and runs a docker build step in it.

Ideally this should run without problems. But unfortunately that’s not the case. Running this pipeline results in a “permission denied” error reported by the Jenkins docker agent:

The problem here is that when Jenkins uses Docker to create the agent container, it mounts the host’s Docker socket on the agent such that the agent can issue Docker commands (such as the docker build command in the pipeline shown above).

The following figure shows the setup:

As a result, when the pipeline step with docker build runs within the agent container, we get the permission error shown above.

To solve this, you are now forced to create a custom image for the Docker agent in which the non-root user is added to the Docker socket’s group. It’s painful since all you wanted to do was run a simple pipeline.

Even if you create a custom image for the Docker agent to get around the problem described in the prior section, you may still face more problems.

For example, in the following pipeline configuration, assume image my-docker-agent is a custom Docker agent image that solves the problem in the prior section.

The pipeline has a single step that requires running a Docker container named my-container within the Docker agent container.

This looks perfectly fine, but the pipeline step docker run --name my-container my-container will fail if the host already has a running container named my-container.

In order to avoid this type of failure you are now forced to either avoid naming containers in your pipeline steps (which is fine but restrictive) or simply dedicate the machine to running Jenkins only. This way you eliminate the chances of naming collisions between containers ran by Jenkins and other containers.

The problem is not specific to container names. It occurs when naming other Docker resources too, such as networks or volumes.

All of this adds to the pain points previously discussed.

Let’s quickly recap the problems that we’ve faced up to now in our quest to simply run Jenkins in a container and use the Jenkins Docker plugin:

1) We had to create a custom Docker image for the Jenkins master. Image jenkins/jenkins did not suffice.

3) If we want to run Docker commands in our Jenkins pipeline, we had to create a custom Docker image for the Jenkins agent. Image docker did not suffice.

4) In the pipeline steps, the Docker commands we issued were performed with respect to the host’s Docker daemon. As a result, these may fail if they name Docker resources (containers, networks, volumes) which collide with resources used in the host already.

While these may seem as trivial problems, they will likely take you several hours to figure out (as they took me while researching Jenkins interactions with Docker), taking precious time away from your real objective of running your Jenkins pipeline while leveraging the power of Docker containers.

It’s possible to completely avoid problems (2), (3), and (4) described in the prior section by running Jenkins inside a Nestybox system container.

Problem (1) is inevitable because we need a container image that has Jenkins and Docker within it whenever we want to run Jenkins in a container and configure it with its Docker plugin.

The solution consists of using a system container image that acts as a dedicated Jenkins sandbox and has the following software in it:

We have such an image in the Nestybox Docker Hub, together with it’s Dockerfile. It’s called nestybox/jenkins-syscont and it’s here.

The Dockerfile and supervisord configuration for that image can be found in the Nestybox GitHub site here.

Here is how things would work. We assume that Nestybox’s Sysbox container runtime is already installed on your host (see Free Trial below for info on how to obtain it).

First, launch the system container with this simple Docker command:

This command tells Docker to use the Sysbox container runtime to launch the system container.

Notice how the simpler command avoids problem (2) above (i.e., no volume mount or permission to the host’s Docker socket are required). In fact the Docker daemon inside the system container is completely isolated from the Docker daemon on the host.

The following figure shows the setup. 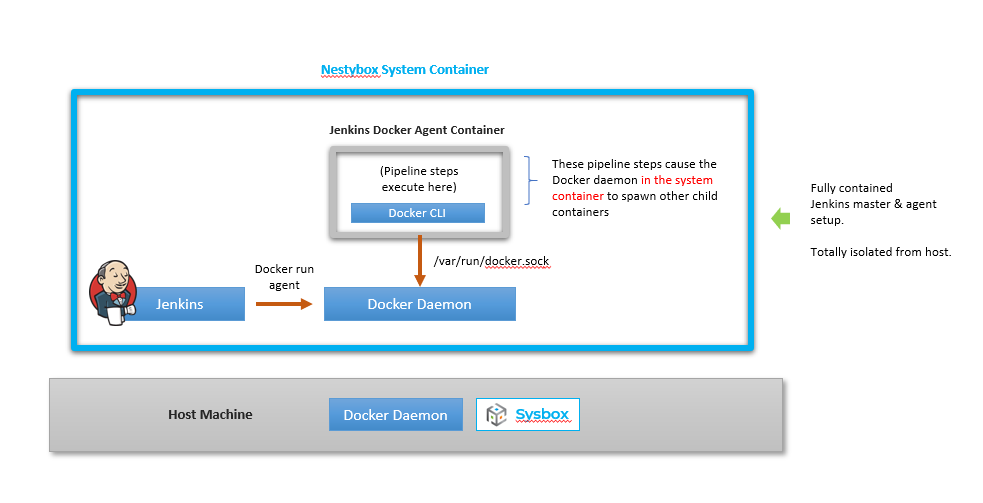 For example, on my host Jenkins is listening on port 32789 as shown below:

Thus, if I direct my browser to that port, I’ll see Jenkins there:

I can then access Jenkins by pulling the credentials from the system container:

You can then configure and run your pipeline as usual. For example, the pipeline configuration for the golang image we showed earlier (repeated below for convenience) works perfectly fine.

In this case the docker container with the golang image would be created by the Docker daemon running inside the system container.

Now, what if your pipeline steps need to run Docker commands (e.g., to build or run a container from within your pipeline)? That’s easy now: simply specify the pipeline’s agent configuration as follows:

As shown, the Docker agent uses the docker image (the official Docker-Hub image containing the Docker CLI in it). No custom image needed anymore. Problem (3) above is gone.

Why does this work?

Fundamentally, this solution works because the system container image is acting as a virtual host (or sandboxed environment) inside of which Jenkins can create containers by leveraging a dedicated Docker daemon, in complete isolation from the underlying host.

The permission issues are gone, because all work inside the system container occurs under user “root” (which is mapped to a non-root user on the host by the Nestybox system container in order to enhance security).

This means you can use the host for other tasks too, without ever worrying about colliding with Jenkins and it’s container operations.

It also means that when writing the pipeline steps, you have no restrictions even if those pipeline steps require building or launching Docker containers. Since the pipeline is running inside the system container, you can be sure that you’ll never collide with Docker resources on the host itself.

With this approach, you can launch Jenkins, configure it via it’s web UI and have your first pipeline running in minutes.

We have developed a prototype and are looking for early adopters.

You can get access to free trial on our website. We think you’ll find it easy to run and useful. Your feedback will be much appreciated!